It was my birthday a couple of weeks ago and I was imagining myself as my friend Victoria who is impossibly cool, especially when it comes to anything to do with the water. She’s at one with any kind of H2O and anything that floats on it. So, being confused and thinking ‘that’s me too,’ I bought myself a stand-up paddleboard (S.U.P) and presented it to Neil as my gift. Neil was pleased with himself (me) as he’d fancied getting one and his generous gift meant he could try it out too. I was pleased because I could picture myself walking down to the quay at Blakeney with my board and catching those early morning tides. What fun I’d have.

Monday morning rolled in with glorious blue skies and a gentle easterly breeze. It was my day off and it was a morning tide so, after taking the children to school, I figured I could get in a couple of hours on the water and fulfil my long held ambition of traveling from Blakeney to Morston, and back again, via the creeks. I collected my SUP board from the boat yard and I headed on down to Blakeney Quay.

It was 9 something in the morning and Neil had said high water was about 10 something but I didn’t even think of this as I knelt on my board and pushed myself away from the slip. I was  thinking how great it was that my day off was warm and sunny. I had the cool sea breeze in my face and the water at my feet. I pushed the paddle into the water and propelled my board forwards turning left and down Agars creek towards Morston. 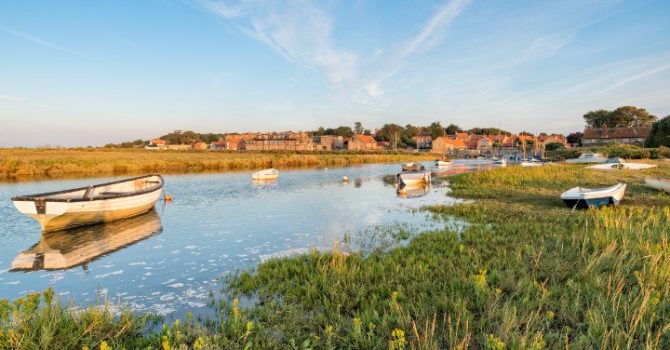 I could try and tell you how beautiful it was but my words will not do it justice. I can’t even show you a photo as I had nothing with me; no phone not even a watch. It was just me, the paddle and the board. I was totally immersed in the moment. I stood for a bit but the tide was so strong I sat down, my legs stretched in front of me and watched as the tide pushed me down the meandering creek. In the tranquillity I was able to pick out different sounds; the bird song, the buzzing insects and the gentle lapping of the water against the muddy banks. I had slipped away from the world.

I couldn’t remember the last time I’d been so alone, so unreachable, so awed and at peace by the natural world around me. I suspected it had been years, maybe back when I was a child and spent my summer holidays playing at the old railway or the allotments. Both were strictly off limits due to the dangers that surround them. The old railway had high, over grown banks that hid pits and gullies whereas the allotments had fruit to snack on while I tried to dam the river that ran through them. Because they were forbidden places I couldn’t stay away and would get into all kinds of scrapes. Luckily I now had age and wisdom on myside so, as I floated down to Morston, I could enjoy this childish sense of exploration and wonderment, safe in the knowledge that this time I wouldn’t get into any kind of bother. 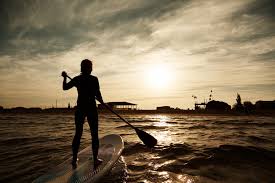 It was with a sense of accomplishment that I approached Morston but also with an increasing sense of thirst too. I began to wish that I’d brought some money with me in order to buy a bottle of water at the National Trust shop. Instead, picking my way barefooted across the car park, I went to visit my friends at Norfolketc and imagined the big glass of water they’d be able to provide.

Norfolketc was shut. Now I was really thirsty. I paused before heading up the path to see my old neighbours at the Coastguard Cottages. Stuart was about to go out but took pity on me and gave me a glass of Elderflower cordial. We stood and talked for a few minutes and then I walked back down to the car park with another of my old neighbours who was going onto the marsh to walk his dog. My time at Morston was thoroughly pleasant, talking with friends and customers. I had no idea how long I’d been as I didn’t have a watch but I had a nagging feeling that I might have taken too long. 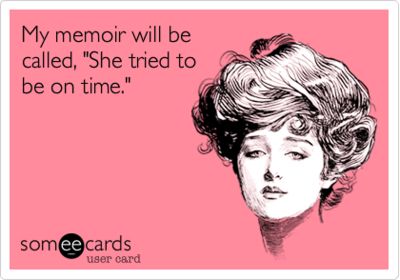 Back on my board and headed back to Blakeney I noticed the wind, now against me, had increased so I knelt on my board and, although it was hard work, I was able to get a pace on. I admit to getting a little distracted when I saw the thick emerald stems of ripe samphire glinting against the brown muddy banks of creeks. I stopped intermittently and pulled the odd handful, thinking how nice a supper of samphire, smoked mackerel and a poached egg would be. I began to day dream; to think that everyone should have a go at paddle boarding; to collect the food for their supper like this. I was at the half-way point between Blakeney and Morston, where the creeks narrow considerably, when I started to feel the onset of worry. The low tide and narrow creeks meant there was no space to get the paddle beside the board and into the water. I also noticed that even standing up, I was not able to see above the marsh. My board became wedged between two exposed ruts of mud. I discarded the paddle and tried to push the board forward with both hands. It wouldn’t move. I got off the board, slipping in the mud and dragged it forward before hopping on again. Really, in hindsight, I should have abandoned the creek then but I was determined to board back to Blakeney Quay.

I made it to a point where the creek forked. Did I go straight on or right? 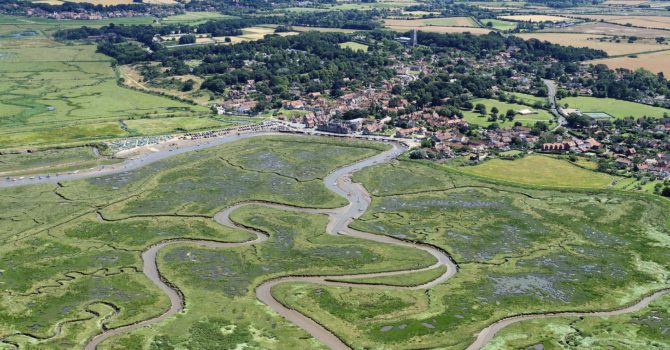 I had no idea. Straight on I decided. I was panicking. There really was no water, the banks of the creeks towered above me and I felt that I must be lost, deep in the marsh with a bloody great big board to somehow get home. If I followed the creek then I would make it back to Blakeney quay I thought, as I tried to quell the crisis thoughts:

I told myself to calm down.

I was going to be lost.

I was going to be okay.

I was going to pass out through heat stroke.

No one would know where I am.

I couldn’t even phone for help as I had left my phone in my car.

I would be discovered, lost and wandering the marsh, by a drone and Neil would be so embarrassed.

A million other thoughts flooded my mind, all in the space of probably less than five minutes. In my panic I abandoned the board and began to drag it behind me but failed to notice that the creek had become so narrow that I couldn’t lift my board to turn it. I had to walk over it and dragged it, bottom first, back down to the point at where the creek split in two directions. I tried the other creek, splashing through mud so thick and gloppy that my legs sank up to my groin. That was it. Muddy pants were the final straw. I had to get out of the creek. I was vaguely aware of the sharp shells cutting and slicing into my legs and feet as I thundered down the creek, my angry, demented steps throwing muddy water all over me and up the sides of the creek. I clambered up the side of the bank, tearing at the grass, my feet slipping against the slimy mud. Unable to get a solid foot hold but able to poke my head high enough and for long enough to see that I was actually quite close to the coastal path, I fell back into the creek. I saw up ahead that the bank of the creek dipped low and that I would be able to slide the board up onto the marsh. I approached this task with tunnel vision, telling myself to calm down. I made it to the low piece of bank and pulled myself up, panting as the relentless sun beat down on me. 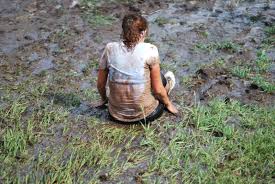 I felt like crying because I had failed. I hadn’t made it to Morston and back. I couldn’t even pull the board up onto the bank using the leash so I slid back down into the thick mud and summoned the strength of Thor, lifting the board and throwing it up onto the bank. It fell back a couple of times, smacking me in the head and shoulders. Once it was securely wedged in the grass on the bank edge I climbed out of the creek again and looked down to see my supper floating down the creek in the remaining two inches of water. This made me really cross. The only good thing to come out of my adventure had been collecting that Samphire and now it was floating off. No. It wasn’t going to happen. I slipped back down into the mud and roughly scooped up as much of the samphire as I could and then hauled my way out of the creek. Again.

I was right in the thick of the scrub on the marsh and because I was hating my board I decided to leave it where it was. There was no way I’d be able to drag it across the marsh on my own. I was still high on adrenalin so was unable to feel the gorse and grass cutting me as I pushed my way to the foot path but I did swear a lot when I came across another creek that was too wide to jump meaning I had to climb down into it in order to get across. 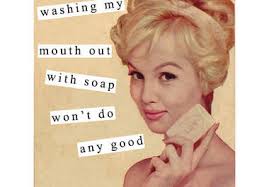 It was a long, hot and uncomfortable walk to my car and for once, I did not smile or say hello to the people I passed on the sea wall, I figured they wouldn’t mind as I probably looked like a swamp monster. At my car I threw my son’s coat on the seat and slipped behind the wheel. I felt giddy. My initial thought was that ‘I’d better not tell anyone what had happened to me.’ It was the same thought I used to have when I got into scrapes as a child and knew that my Mum would be furious with me for having been so stupid. It made me realise that it was the first solo/off-grid adventure I’d had in years, and that I had survived. The thought that immediately followed was that Paddle Boarding is not for me. 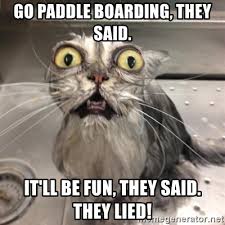 I told Neil of my escapade and subsequent rejection of paddle boarding and he urged me not to give up. He reminded me of how I excited I’d been to be going out on the water on my own and how, if I’d paid attention to the time, it would have been perfect. We walked out that evening and recovered the board and I’ve promised Neil and myself that I will try again.

You definitely need water to paddle board.

It helps to know the tide times.

There are benefits to wearing a watch.

The biggest thing I’ve taken from this is that it’s always a good idea to buddy up with someone who knows what they’re doing, so my next trip out on my paddle board is going to be with Victoria and hopefully I’ll be cool by proxy.